An Inside Look at the American Public School System as Seen Through the Eyes of Its Most Underrated Player: The Janitor (and Other Musings) 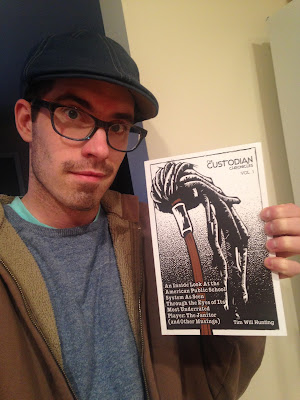 So yes that is a book title.  Yes it is long winded.  Yes I am also long winded.  I will try my best not to be.  If you want the long and short of it (which, funny enough always means "the short") if you want to read something original, eye-opening and knee slapping then you should definitely
CLICK HERE AND BUY THIS BOOK AND READ IT.

My friend and fellow Long Islander Tim Almeida, front-man of the socially conscious live-band alternative rock/hip-hop group The Native Alien Tribe aka Tim Will Hunting (who rapped with me for Spontaneous Sundays with AllOne episode 4) and of course hard-working Custodian, self-published his debut book based on his CUSTODIAN CHRONICLES BLOG  and PODCAST which I had the pleasure of reading recently. Yes, the title is overly long but the book is actually a manageable size collection of about 180 pages. Should you judge a book by its cover, yes that is a mop with dreadlocks.  The book is an amalgam of musings (as the overlong title puts it) and being that it is derived from a blog and riffing on an eponymous podcast, it is a chimera of forms. The content is comprised of prose chapters, lists, diagrams, poems, intermittent emboldened lyrical micro-pages like poetic tweets and even hilarious copies of emails to his fellow staff to illustrate his points or accompany his anecdotes and rants. Tim comes across as a mix of Zen Buddhist, eco-warrior, liberal, skeptic, realist, comedian and poet. Despite the seriousness of the topics discussed within; politics, the ecosystem, revamping the education system, mortality, the pharmaceutical industry and more, the book is enjoyably and liberally flavored with humor. There are certainly themes and focus within each chapter but the book is written with a conversational stream of consciousness style.  In his irreverent and cynical,  yet optimistic, loving strain of thinking reminds me of a creative blood relative of Kurt Vonnegut and/or George Carlin. Like both of these brilliant and celebrated men, his biting, crass satire and acerbic analysis comes from a place of love and hope.
As Tim says on page 120:
"I'm not bitter, I'm just passionate, LEARN THE DIFFERENCE"

Tim is witty and poignant and the rough edges of the every-man make him no less insightful.  Tim isn't self aggrandizing or on a high horse as may be typical in books addressing such heavy issues as Custodian Chronicles. More often than not, Tim is self-effacing and readily admits to being devoid of real answers or having the authority to dictate these changes.  The paradox here is that it seems to me that Tim's unqualified nature in regards to these ecological, social, educational, and governmental critiques that he is so passionate about, is exactly what makes him an appropriately humble and divorced perspective to comment on them.  Perhaps not exactly a book to read to your kids, but one to read and consider your kids throughout, as it often reminds us of how if we don't tenderly and thoughtfully shape our children and our world, then the materialistic, destructive world will happily manipulate our children and their perceptions further.  Overall this book feels as though it is beating its head against a wall wishing we had no walls at all so we could get to communicating genuinely as human beings again.

Although being called Custodian Chronicles the book isn't entirely concerned with academia.  Sometimes the school environment is just a consistent backdrop whose anecdotes and happenings become prompts for ranting/venting essays . The book's scatterbrained stream of consciousness style is rife with detours and asides that are occasionally beguiling but overall Tim's unpretentious voice and style lends itself to a seemingly entirely sincere narrative experience and made me feel as though I was there with him along the mental journey from the catalyzing of the topics and their subsequent winding riffs and free-associative jumps.  Some of Tim's concerns can be overtly explored or beaten to death and it feels a little as though he is preaching to the choir, but that is a matter of subjective perspective.  I'm sure I mention this because I already agree with many of these pertinent points he is making and have dabbled in the realm of knowledge and information that he concerns himself with.  That being said, even when I found myself reading about issues that I cared about, I was often learning something new because Tim isn't just the pothead lefty liberal rambling at the party, he is a free-spirited and educated realist who is passionate and well researched about the conversations he is interested in having and the trends in the world he wants to change.  It would seem to me that Tim elaborates exhaustively on ideas because he has seen firsthand how many people these obvious and revolutionary ideas are foreign to and therefore how important it is to beat people over the head with these concepts to emphasize their poignancy and elicit change. I thoroughly enjoyed this book which was digestible and rewarding, funny, thought provoking and original in its voice and presentation.

Now that you've heard "the long of it"....
CLICK HERE AND PICK UP THE BOOK ALREADY!

If you're around Saturday, March 25th I will be accompanying this man for the release event at Rockville Center's The Turn Of The Corkscrew.  The event will feature comedy, readings from the book, music, a poetic performance by yours truly, a live recording of The Custodian Chronicles and of course, books and wine!
Here is the flyer: 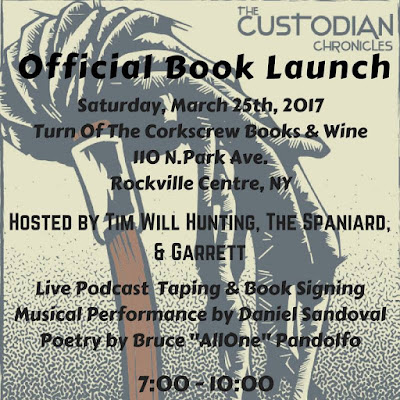