Hello friends!
I recently out a new professional video of me performing a piece I wrote called "Building After Buildings" about a fallen sanctuary I had called Cool Beanz Coffeehouse!  Because it's me...I wanted to speak on the making of the video, the subject matter of the song and background of the piece itself a little bit....Without further Ado....
Washed Up  Media (The making of the video)
This  video for "Building After Buildings" was shot in early March, 2014 with Sean Ageman, the one man video production crew that is "Washed up Media". He does a lot of video work for bands and groups on Long Island as well as bigger groups from out of town.  This was our first time working together and I'm very pleased with my experience working with him both on-site and in communicating during the production process.  I'm happy with the results due to the hard work he put in editing wise!  The video was shot by taking four or five takes of my performing the poem, with Sean adjusting the different camera angles and whatnot.  We did one or two more takes of me performing the poem, just for the sake of getting a clean audio track.  This is just the first of many collaborations we will be doing, as I'd like to put a lot more visual media out this year, and he's completely of the same mind-set and on board!  If you're looking for someone professional, down to earth and affordable, Sean is your dude... check him out here:
Washed Up Media Facebook Page
Subscribe to the Washed Up Media Youtube Channel!

Cool Beanz (background story of a sanctuary)
The location for this video is in St. James on Long Island outside of a cafe called Cool Beanz (As you've probably surmised).  I sort of grew up as a performer there, attending my first consistent open mic performances on a weekly basis Tuesday nights from 2006-2009.   My friend Andrew Mesmer hosted an open mic there for a little more than three years and it became a breeding and mingling ground creatively for a ton of local artists and poets and was a huge support system socially.  I spent a minimum of 1 night a week there, sometimes both weekly open mics, shows on the weekends and social stops for snacks/a comfortable place to read, i'd be there four and five times a week!  It was undoubtedly  a second home.  Probably all of the reason I know anything about performing or broke into music at all is due to having this consistent "stage" to hone my craft.  I met nearly everyone even remotely involved musically or otherwise on my album Coal Aberrations.  We performed alongside them/shared seats and drinks with at Cool Beanz first!  There are tons of little creative/social meccas like this at independently owned cafe's and too often they shut down due to financial hardships thanks to big corporations out-selling them and the economic difficulties of maintaining a business as dubiously sound as opening a cafe.  But we don't really open cafe's with the intent to make money do we, I'd like to think that there's something more altruistic than that at hand...there has to be.  You are the leader of a congregation, even if unwittingly, or if you choose to foster such an environment.  As proof of what family, here is a group shot that dates back to 2007, see if you can spot me...I'm right up front with the blue sweater, long hair and no moustache! This crowd here is just a fraction of the people on any given night, all of us family inspired and invigorated by one another. 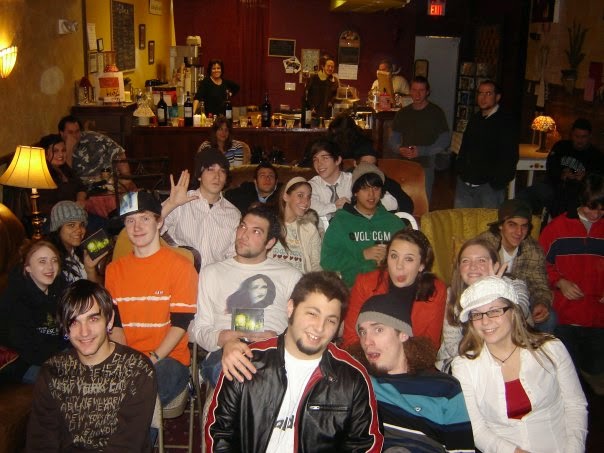 "Building After Buildings" (the background story of a eulogy)
Around 2010 the cafe had to close due to financial reasons and everyone was distraught.  There seemed to be this disheartened opinion that the end of our meeting place was to be the end of our creative endeavors and our friendships.  I was sad but I couldn't agree less with these fears, so I wrote this poem as an homage, as a eulogy, and a thank you to our safe haven, to the importance of community wherever it is found, and a rallying call to carry the torch of a fallen sanctuary and to remember to keep our own inspired fires stoked always, no matter the place, no matter the group of people.  I performed the piece "Building After Buildings" at the open mic the last week of the cafe being opened which was a very emotional experience for myself and others involved.  When thinking about doing a video, I knew I wanted to do a video outside of the hauntingly closed cafe, four or so years later, still vacant with the sign seemingly desperately holding on to the building it was rejected by, a sincere corruption of everything that this place meant to so many people.  I tenderly rewrote a few aspects of the piece with a new perspective and set of skills, kept the memorization loose so that I wasn't dialing in too much and could sincerely think and feel out all that I was saying in the piece and really  consider each word as I was there speaking to my fallen home.

I hope you enjoy the video and that it reminds you of a place analogous to my Cool Beanz that fostered or fosters your creativity and safety, that you've built a family around of inspiring people.  I'd appreciate if you shared/liked the video and subscribed to my channel as I said, Sean Agemen and I will be putting out a lot more material in the future!  Don't forget to support your local businesses and cherish these holy-grounds (insert coffee pun) while they're blessedly there to enjoy.
Take nothing for granted, give all that you can, and perpetuate the greatness you've learned and been improved by experience.
Keep building,
-AllOne
Posted by AllOne at 8:51 AM No comments:

I've got some new live performance videos to share with you!!  While preparing for the impending May release of Creative Differences, A Split, D.o.drent and I have been performing a lot of shows and open mics.  We've yet to perform the material in a set together on stage, but this material has been in the pocket and on stage long enough that it's really polished.  He and I have recently posted videos shot of our solo songs from the project.  There are two more songs that we have made together (the title track "Creative Differences" that opens the split, and then "Cause & Effect" that closes the album out). We've yet to perform these pieces live together yet but look forward to and will certainly share them if/when they're filmed!
His two performances of the songs "Walking Nightmare" and "Pawnographic" were shot in Rhode Island at Everett Company Stage during their "Open Stage" event on 3-7-14 and 2-7-14 respectively.  On the album version of "Walking Nightmare" you'll hear me perform a piece I call "Termagant" that I wrote specifically for the close of the song!
My two songs "Work In Progress" and "Quality Vs. Quarantine"  were shot by my friend Elly Cornwell at an amazing show that I played at Long Island's The Velvet Lounge on 2-28-14!  There is also a short snippet of the aforementioned title track in this video, from the same night: "Creative Differences/Homesick Is Where The Heart Is"  as well as a video of me performing "What's Your Problem?" !  Please watch and share these videos, be sure to give feedback and subscribe to our channels, we could use the support and there is much more visually on the way! 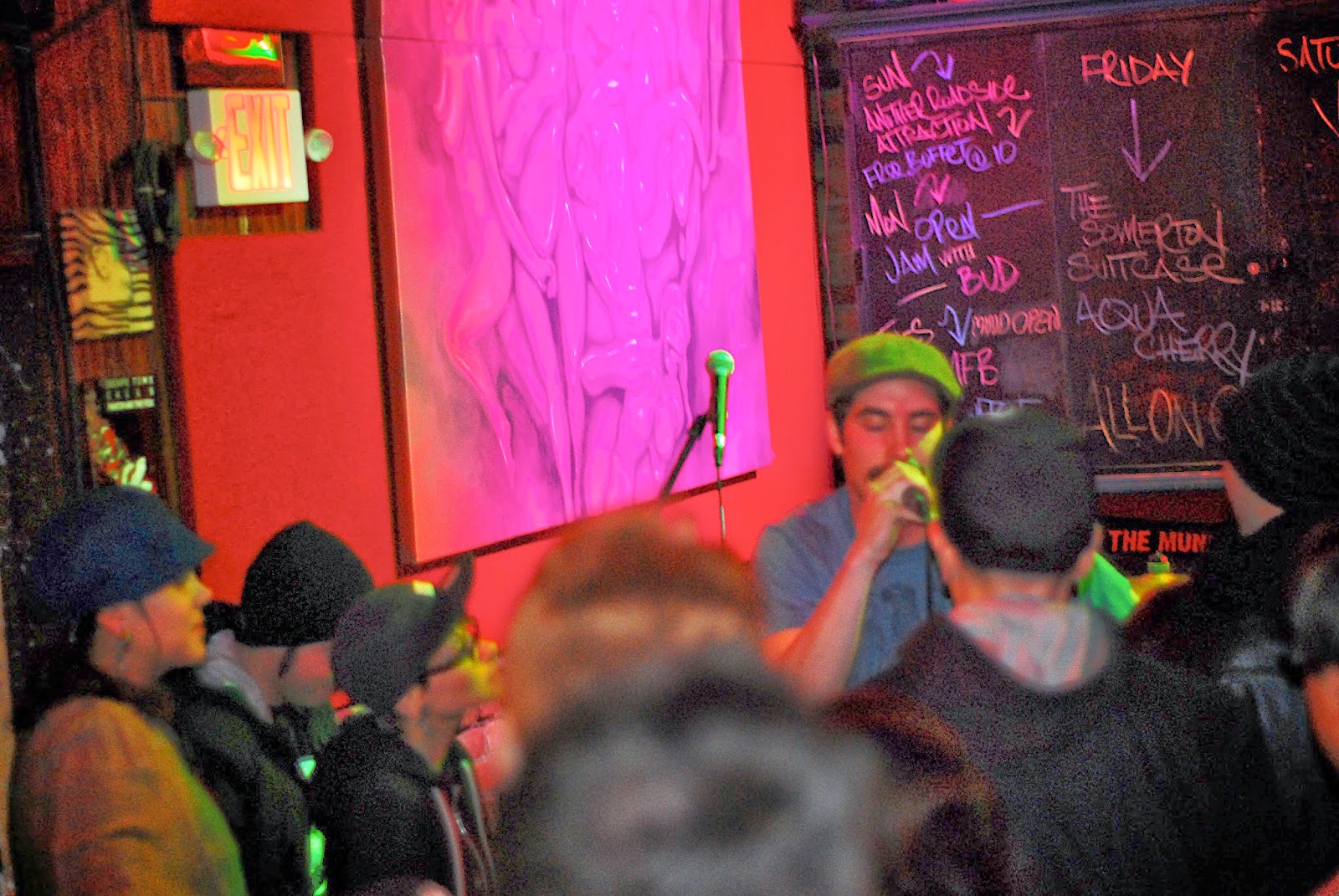 A Word On Live Performance
Second to writing, performing poetry and music is probably one of my favorite things to do.  The energy that is channeled and shared from the performer, the sharing of your art in a raw way and the connection that there is between the audience and the performer in an ideal way is the most rewarding and exhilarating thing I've come to be familiar with!  In my/the best performances, there are no walls or boundaries between myself and the onlooker, we are connected, our eyes are locked, words are exchange, and each person has a moment that we both know is specifically for them. 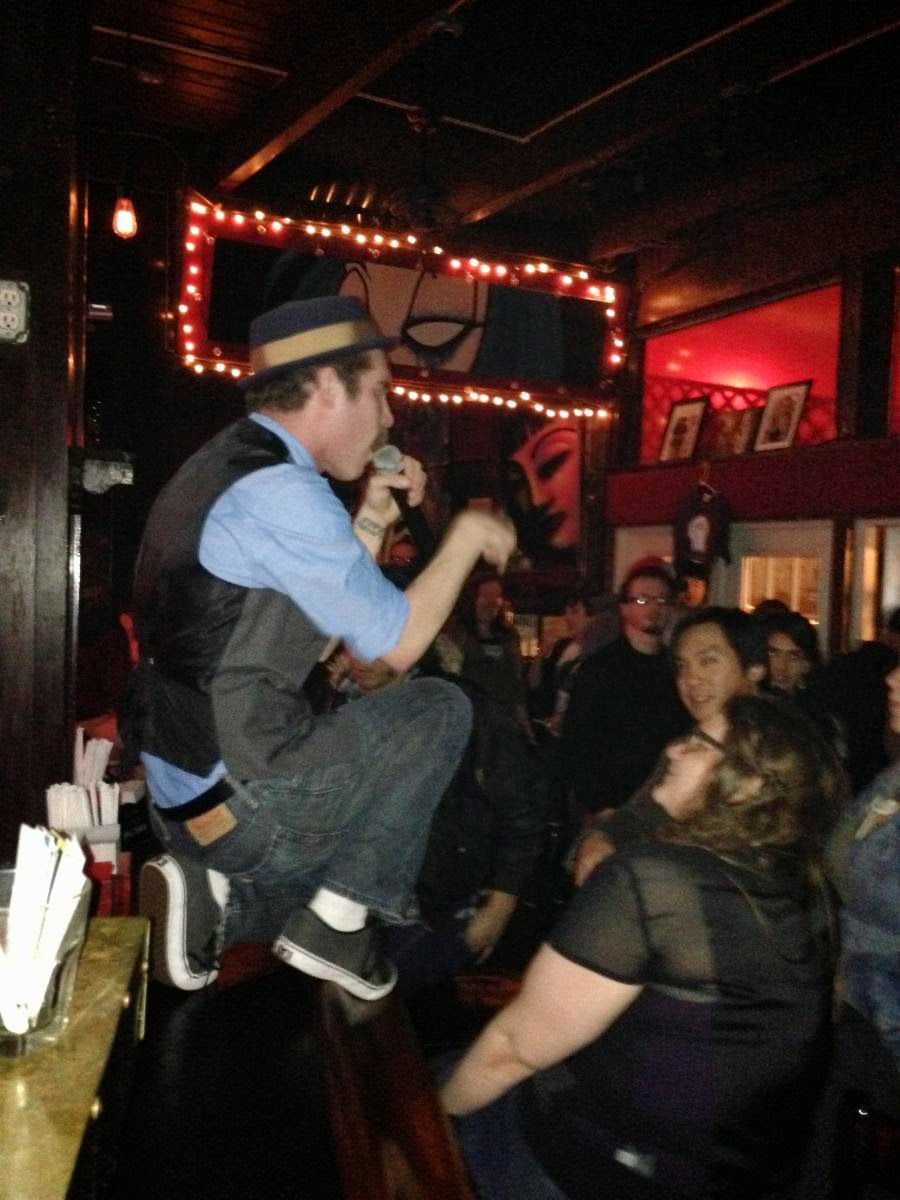 When people are interacting with the lyrics, singing and shouting back to me, rapping alongside me or coming up on stage to help me make music to perform my words over...we are connected, we are one.  So much love and sincerity passes between us in these moments and that is why I'm out performing 4 and 5 times a week.  I love it, I love people, meeting them and hearing them and giving them a distraction and something to enjoy and remember.  If music is to relate and connect to, then the performance ought to emphasize that and achieve that goal even more than the record does.  I think an album and a performance should be two different experiences.  The recorded project should be refined and everything is great, but the live performance is an opportunity to stray from that, touch the people (literally and figuratively!) in front of you, play around with what exists and make alternative versions of it.  My performances in those videos aren't perfect, and they don't exactly sound like the record, but there is a renewed life given to each song as I'm doing more than dialing into memory and locking into what the song sounded like when we recorded it, I'm using that as source material and tailoring that to what the moment in the venue calls for.  Some people have told me they wish my albums were more like my performances.  One day I may put out a project comprised of live songs, as there is an energy that comes out that far exceeds the precision that an immortalized and crisp recording requires.  Until then, you'll have to come out to an AllOne show! Click here for my updated performance schedule!

AllOne North America Summer tour!
I'm planning on hitting the road again! Shortly after the May release of Creative Differences I'm planning to embark on a tour that spans nearly two dozen towns/cities around the country and even making my first foray into Canada!  I'm in the prelimenary stages of booking this DIY tour around the country right now for June/July...If you want me to come to your town or have some advice about any of the following cities, please don't hesitate to email me at AllOneVoice@gmail.com

This itinerary has no solid/current dates but has been chosen based on some places I know people/can set up events and where the Megabus will allow me to go, how I can leap-frog from city to city using the bus!  Right now my route is looking something like:
Providence, RI
New York, NY
Boston, MA
Burlington, VT
Saratoga Springs, NY
Albany, NY
Syracuse, NY
Rochester, NY
Buffalo, NY
Atlanta, GA
Nashville, TN
Indianapolis, IN
Chicago, IL
Detroit, MI
Ontario, Canada
Detroit, MI
Pittsburgh, PA
Philadelphia, PA
New York, NY

"The world a stage? One act play, we won't bow after curtains closing.
We child actors earn Tony's...Wow factor-in spread smiles past your sadness,
Pagliacci performed that best! Your role in Wonderland? The Looking Glass a Rorschach test."
My closing lines from Cause & Effect.
See you from or on the stage I hope!
Love ya'll!
-AllOne 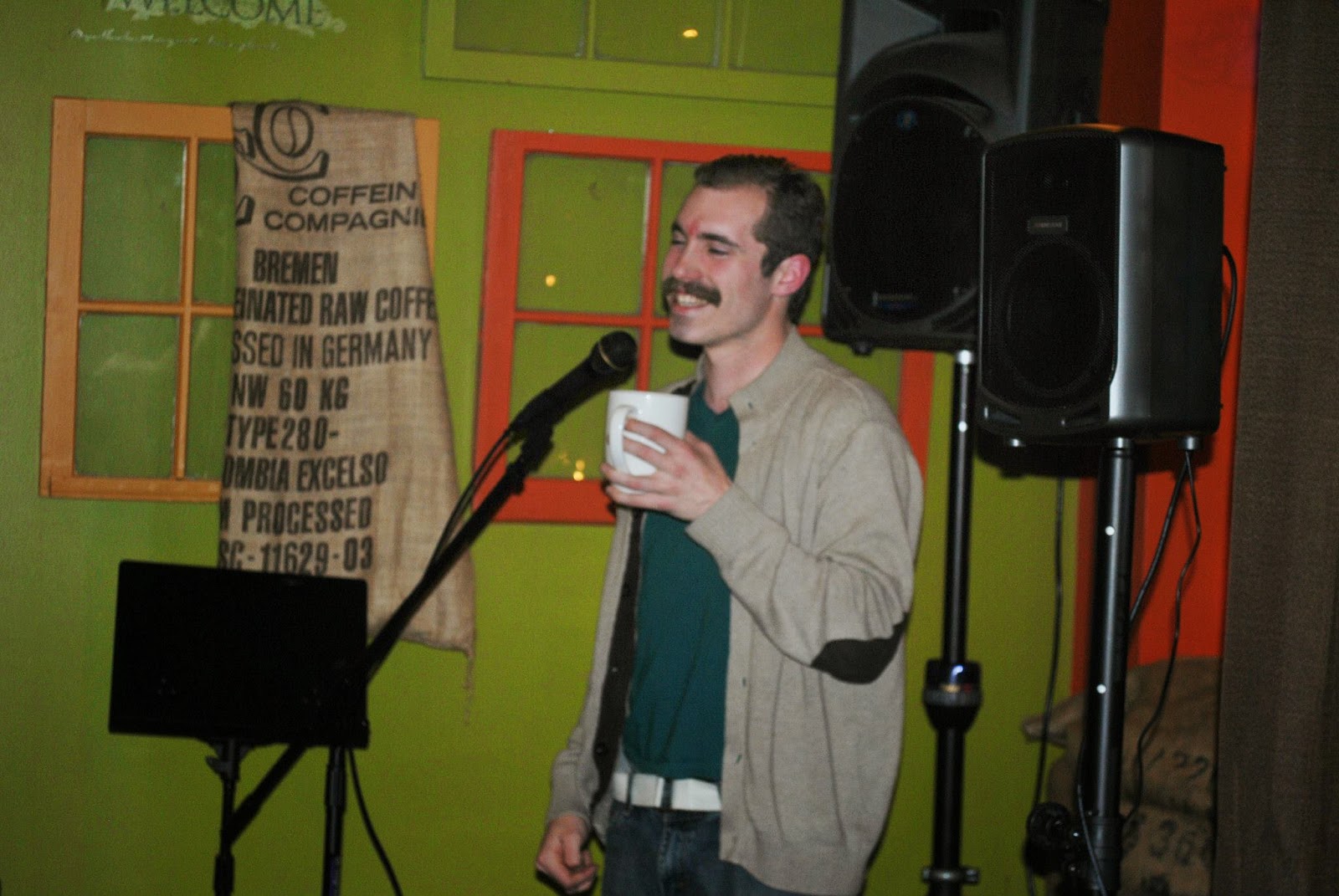 Posted by AllOne at 8:38 AM No comments: