My wonderful friends we reach the close of the magnificent journeys of the AllOnederlust tour...accompany me on one last weekend if you would...

30 hours of travel on Independence day
July fourth wasn't necessarily celebrated as I was traveling the entire day! Around 9:30 I left my good Canadian friend Jeremy's home and I began a 30 hour journey to Atlanta that would stop in Detroit and Chicago on the way!  I started the day discovering that my friend KNife released his new album "ICONOCLAST" a politically/socially conscious rap album with some advanced and alternative musicianship involved.  For one of his songs, "Least Informed" I wrote the poem "anti-social-network-ethic"  which ended up getting published in a recent "Bards Annual 2014" Long Island anthology!  The album has a good mix of skillful brag raps and conscious material and I recommend you go to his Bandcamp page I linked earlier you can download it for free!

On the way into Detroit, I had relatively no trouble getting over the American border, despite my worry.  I met a nice Canadian girl Joline.  She was crossing to meet a date and didn't even realize it was Independence day, which makes us even for when I had no clue about Canada day earlier in the week! I eventually got bus advice and help at the Rosa Parks center from a strange and kind woman named Theresa.  While talking to Joline and I, Theresa offered the advice "Grow where you are planted" which she took to mean act the way you are naturally and do so unabashedly! I can get behind that!  I listened to the following threea albums on the way to Chicago from Detroit, "Creative Differences (A Split)"  Sadistik's "Ultraviolet" and Sage Francis' "Copper Gone" !  I couldn't take my O'Henry book with me onto the bus since it was too big so I started reading my copy of Robert Louis Stevenson's historical fiction novel "Kidnapped" that I picked up while in Chicago two weeks prior!

Dave's peculiar tales and my  extensive travel
When I got off the bus in Chicago I had five hours to wait for my midnight bus at to Atlanta.  I mostly read by lamplight on the sidewalk sitting in the humid night on my luggage.  I met an odd man and ragged man, Dave who sat next to me and began telling me some wild stories about his life as a "Dead head" and how he traveled and did sound work at concerts for all sorts of famous acts and if I call a certain number I could mention his name and get VIP tickets to any big concert for cheap.  We walked for a while and he shared several outlandish and dubiously true tales.  The most entertaining of these was when He was in his thirties he was working on Lousiana oil fields with his uncle.  Suddenly he looked into a hole and saw a dinosaur looking beast...turns out it was a snapping turtle that he claimed could block a whole road lane and had a head bigger than two human heads.  Dave took a fresh log and presented it to the creature and the monstrous turtle snapped it in half in his lethal jaws!  He claims to have tranquilized the creature with what he called "a shotgun with the sleeper bullets" and then called authorities, who ended up needing four trucks to transport the creature.  It allegedly it ended up at a Zoo in New Orleans and they gave him him an envelope that contained six thousand dollars as a thank you for helping the population of this majestic creature, as the beast was female.  While wandering about he started exhibiting more peculiarities, namely picking up and pocketing garbage.  Against my better judgement he ended up unfortunately being a man who just was befriending me manipulatively and ended up begging for money from me.  Disappointed and empathetic, I told him honestly I didn't have any money and he promptly moved on.  I sat and waited for my bus, which luckily came early and mounted the bus to Atlanta around midnight.  Later I spent the next several hours talking to an adorable seat neighbor named Lauren from Atlanta.  We had a lot in common and she was gregarious and we shared stories, it was nice to have someone on the bus who was actually socially engaging for once, we exchanged information and said our goodbyes.  I got off the bus in Atlanta once more, now Saturday morning, legs stiff and sore and my friends Adam pulled up promptly to the curb and picked me up.

Adam "Obeah"and friends throw a hell of a party 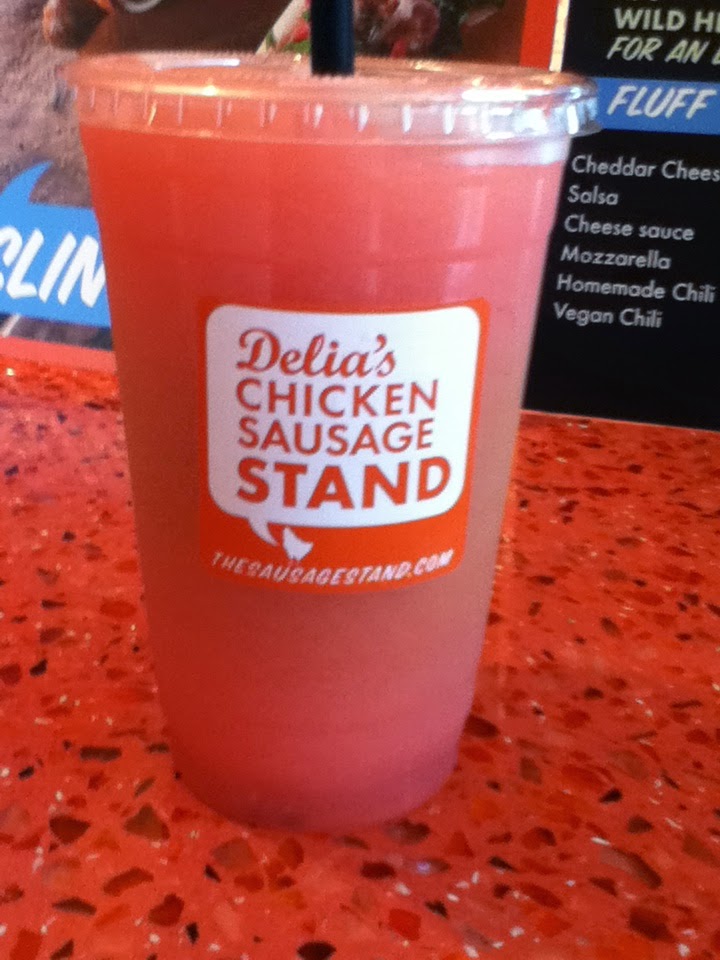 Adam is a really talented guy who raps and DJs under the moniker "Obeah".  He and I met last year through my touring Nashville friends Last Of The Horsemen when they came to perform with his group The ContraVerse (whose other talented lyrical half is Kontent) AllOne & The Room, KNife and Miggs July of 2013 on their "Inoculate" tour. After that performance we were mutual fans of one another and kept in touch. Adam was nice enough to let me stay with him after he had just gotten back from a two week tour with his band "The Difference Machine" and throw a party for me to perform during!  Adam was all smiles and hugs and took me to a tasty new spot that opened by him called Delia's Chicken Sausage where I got sliders and a refreshing Arnold Palmer slushy.  I met his leopard-cat Lucius, who is beautiful and hilariously obsessed with paper bags.  We went to his girlfriend Kelley's house (who is also beautiful, though considerably less interested about paper bags) where the party would take place. 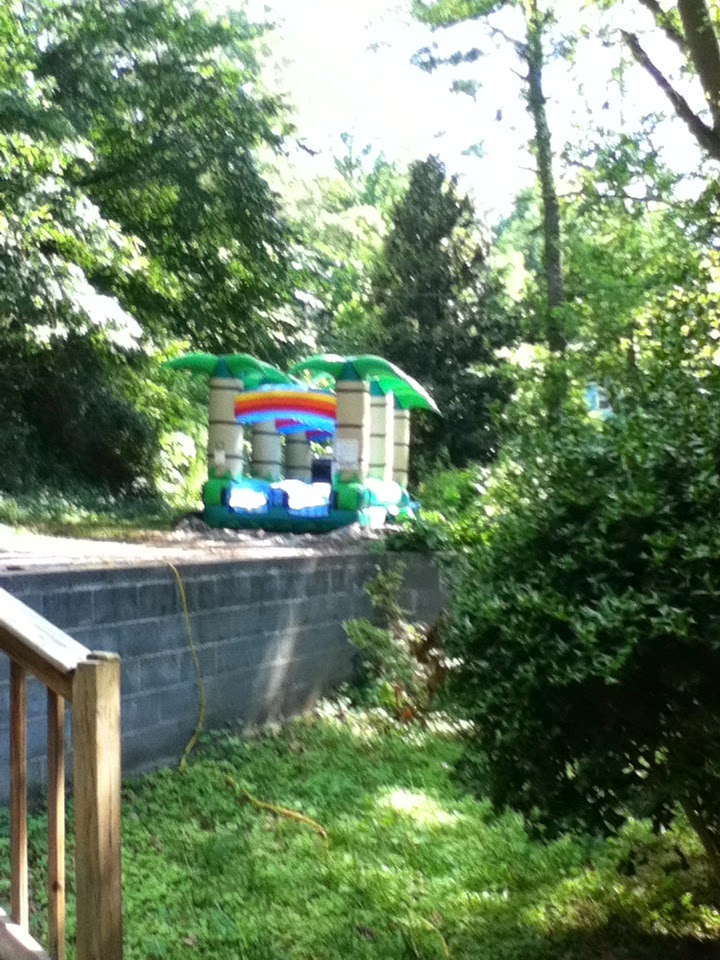 .  The property was a pretty one with lots of foliage and space, Kelley is such a relaxed and sweet person, she is immediately disarming and inviting.  When we drove up there was a giant inflatable slip and slide that Adam and his housemates rented for the weekend.  Dozens of people ended up coming out, I met so many cool people and friends, Adam DJ'ed and everyone had a blast.  So many interesting friends, the music was great and the slip n slide was fun.  I performed later in the night outside and had one of the best experiences of the tour, which was good because I felt worn out and was a little nervous to perform for such a rap educated and musically active group of people.  The response was respectful and enormous and lots of people bought albums after.  One new friend Collin gave me a book of poetry called "This Planet Is Doomed" by Sun Ra and I nearly sold out of CDs that night!  Afterward, some friends rapped in a cypher and we all had a blast improvising!  Spent, went back to Adam's place, where Brett, Leah and Nolan also live and Adam cooked up a before-bed snack! 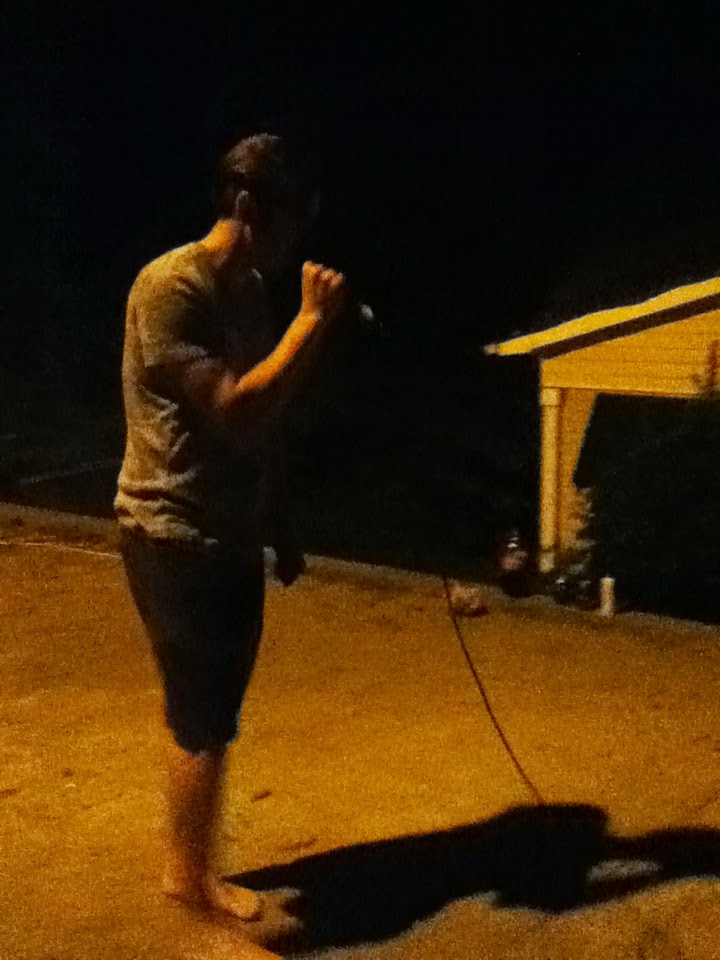 Sunday Brunch and A Slip N Slide summery day
We started the day late and Nolan, Leah and I met about a dozen people at a delicious brunch at a restaurant in a hotel called Local 3.  The place was pristine and classy and the food was unlike any brunch food you'd ever have!  Evidently this big group of friends have made a ritual of going every Sunday for brunch for so long that they get discounts and even sometimes eat for free!  Nolan was nice enough to foot the bill and the conversation among all of these friends was an interesting look into their social and business lives.  We spent a few hours eating and talking casually and ended up at Kelly's house again where the cast of friendly and musical characters ebbed and flowed while we listened to albums and did ridiculous tricks and goofy stunts on the giant slip and slide for hours on end under the hot Atlanta sun!  I think they definitely got their moneys worth on that rental!  Adam showed up sometime late evening.  Retired to the house, wrote for some time and read as well.  Brett came home from work and we spoke for quite some time about life and music and collaborating and such. He has a cool production based project called Deku that I suggest you listen to, as I don't doubt you will enjoy his odd, lovingly made works!  We both entered into the Red Bull Music Academy (which, spoiler alert, neither of us ended up getting into).  Adam and Kelly hung out and we shared music neither of us had heard of, listening to records and albums and such and spoke about making music together potentially.  The entire household of people and group of friends that I met through Adam were so inspiring creatively and entertaining and fun socially, and it was cool to see Atlanta through another group of friends eyes in the same month (no offense, Max and Co. !) 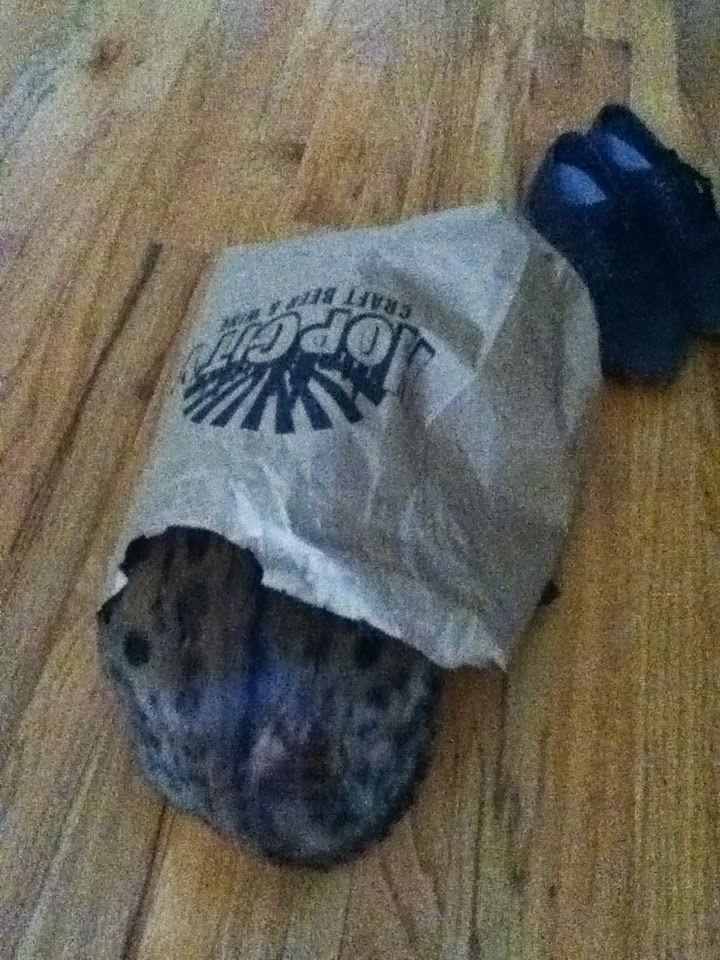 Coming home to NYC, The Final Day!
We had an early morning the next day where Adam and Kelly were kind enough to drive me to Atlanta airport at 7 in the morning for my final flight home.  We said sleepy rushed goodbyes and thank yous and promised to keep in touch and they kindly wished me safe travels!  After all of my bus travel it seemed insane to me to be able to be home from Atlanta to Long Island taking any kind of trip for less than 5 hours!  Atlanta airport (Hartfield-Jackson) is the busiest airport in the world and was certainly the largest airport I'd ever been in!  Luckily, my uncle Joe, who works for Delta helped me out ahead of time and gave me some tips. I had no trouble getting on (I was on standby with a buddy pass) and was at JFK airport in a few hours, home by 11am, bewildered that my trip was over!  My grandmother picked me up and it was so nice to have a hug and be nearby again, after the past month of travel my briefcase and my suitcase needed a replacement, and she had both lying around for me, left over from my Poppy so I was honored to put them to use.  It felt so odd and yet beautiful to be home.  The Onederlust tour was one of the best experiences of my life.  The world seems so much bigger now and yet so much more attainable as well.  Gripes seemed more petty and life seemed more heavy yet my heart lighter and more open than ever.  To all of my old and new friends, my momentary homes and my infinite memories, thank you, I am infinitely grateful, this is just one of many journeys ahead of all of us.  Each of you along the way restored my faith in myself, in humanity and defied my high expectations, excelling far beyond excellence.  Planning this trip was one the most stressful things I'd ever done and it was entirely worth it.  I really can't wait to get back on the road, but first there is music to release, stories to write, and experience to relate.  I hope you all get out there and fulfill your wanderlust, or find it to begin with. I can't thank everyone enough, be it a home, a show, a conversation, a meal that you shared with me, I am a better person and I hope to repay you someday. 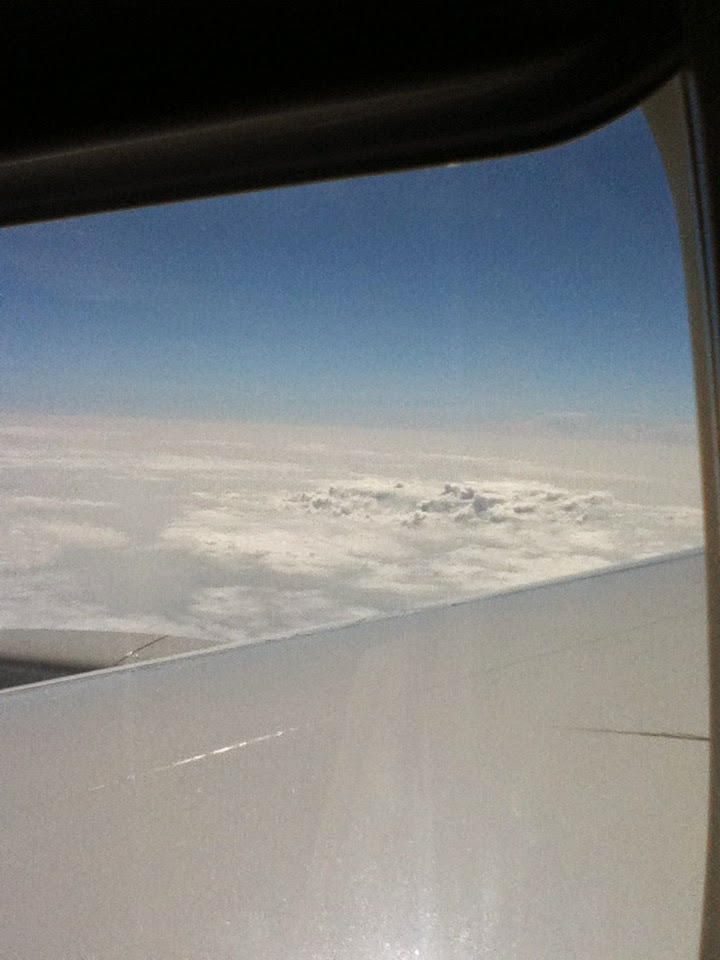 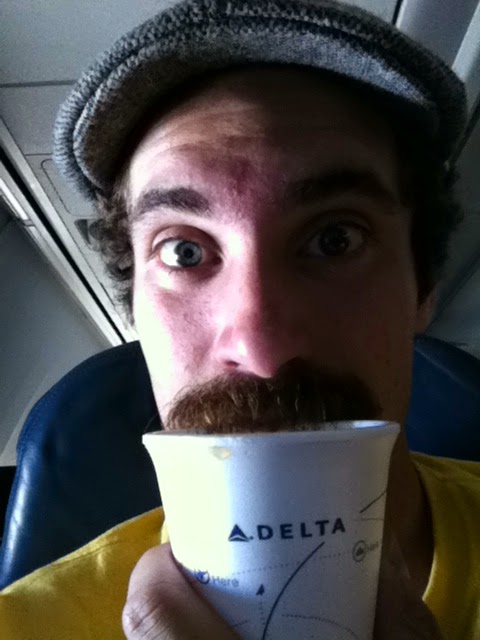