“I've Been Thinking...” behind the songs “THOUGHT PROCESS SERIES” 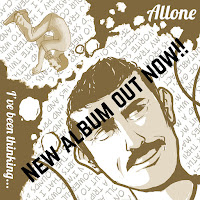 My latest full length album, “I've Been Thinking...” released on the Savannah based label Dope Sandwich Records and Tapes May 3rd is a collection of concepts and narratives that I've written over the last few years featuring instrumental contributions from coast to coast and outside of the country as well. Looking over the collection I'd opine that it is some of my finest work to date (one would hope). What have you been thinking? Over 12 days I had planned on be releasing a behind-the-music sort of blurb for each track.  I got a little off schedule due to a series of crazy life changes and distracting obstacles, but I'm back to finishing up this series! If there are any questions or comments regarding the songs please submit them and I'll do my best to answer and fulfill them! I hope this series is of interest and that the music does something for you!

As a short aside before we get into the details, I'm proud to announce that "I've Been Thinking..." is now available on Itunes, CDBABY, Amazon.com ! 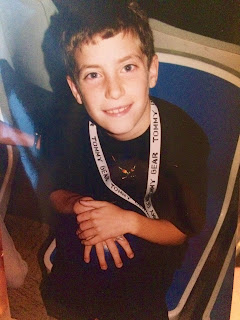 The closing track to the album, Youthtopia was also the last song I wrote for the album from scratch (really, Zoned out was the last one I made significant edits to, because I'd added half a verse to it in the studio when it was the last song I recorded, but I started writing Youthtopia altogether last.).  It was a song idea that I'd had around for a while, and compiled hundreds of lines for this song.  I remember writing the majority of it in two sittings, one in a cafe writing session and the other in the courtyard area of a library.  I had a hard time when writing this, how to reign all the material in and the order to present the concepts in an how to break it up and make it feel cohesive, especially with all of the different deliveries and rhyme patterns that I'd chosen to experiment with.  It took a while to decide what lines the chorus would be and how to deliver it.  I also feel that the third verse is some of my finest writing and arranging to date.

I knew straight off once I started writing this song that this would be an epic (meaning long with many changes, which did in fact render it the second longest song on the album) with some form of an approach similar to the song "Unbelievable"  which I described in the blog as a sort of "rhyming essay", steering clear from anything but relatively direct language.  I knew that this would be a long song simply because of wanting to cover all the angles of the topic: my past, my family, my views on life and my values in youth.  It's an expansion beyond the individualistic empowerment//choose your personal legacy (in the parlance of The Alchemist) messages in my songs like AllOne & The Room's "Revealed (Practical)" and "Build Here" from "The Inevitable Effort".  The hopes for this song were both to give an image of the trend of defeatist mentality I've seen people take in both their personal image and philosophies as well as their social lives and career choices as well as directly that "YOUR LIFE IS ON THE LINE, AND EVEN MORE PRECARIOUSLY IF YOU'RE OBSESSED  WITH WHERE IT IS ON A TIMELINE!"  sort of deal.
More than any other ideas or maxims, this is one that feels most important to me of my values.  I really honestly believe the old axiom "you're only as old as you feel, or allow yourself to feel".  Obviously our bodies age and wither with time, but thinking of life and time as something in an hourglass, as a blanket metaphor for thinking of our capabilities and quality of life as something that is constantly diminishing and escaping us is very dangerous.  The themes on the album, in songs like "Cardiac Compass (Path to Preservation)", and "Seize In Caesuim", are often about our inevitable approaching end, or the scary fact of the progress of life and how we ought to optimize our time here, but here my outlook was less bleak than that should suggest.  While realizing that same fact of mortality I wanted to say...lets not "look back" and be caught up in nostalgia, and lets not be paralyzed by our "look forward" unless it was "looking forward to events".
We will often talk/hear about how smart and insightful children are.  Perhaps because they still enjoy are intrinsic beauties and innocent truths in humanity that are unmarred by many of the societal stresses and insane imprisoning commitments we tend to put on ourselves and restraints we put on our lives as we reach the dubious reward or accomplishment of "maturity" or "adulthood".  We often hear about how we "pass golden years" in certain brackets of time in our lives.  I think that this is very depressing and limiting, I don't believe in delineating or compartmentalizing any particular part of our life as "the best times of our life" in some bleak premeditated way.  Who can say what that is until they've reached the end of their life when the best times were?  Why not just live life enjoyably instead of thinking about how your best times were behind you?  This is somewhat discussed in the AllOne & The Room song "Revealed (Universal)" where I theorize or ponder the tragic irony of missing out on life while you're busy puzzling over the purpose of it. It would seem to me, just a laughably self important side effect of complex sentience to wonder such a thing!  Purpose?!  What purpose?! OR, if you prefer: The purpose is to live! Exist! Go BE!

Enough philosophizing blabbing, Who produced it? 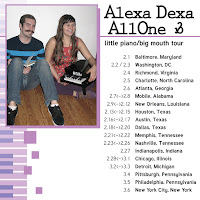 My 2013 tour mate and great, frighteningly talented friend Alexa Dexa produced the song.  She is currently touring Europe and the rest of the world for many months, please check out her music and genius collection of impressive and original music at www.alexadexa.com !  When I considered the concept of the song, Alexa was an obvious choice, both to make this lengthy song interesting and original but also to inject her trademark sound using toy instruments or strange sounds.  In the three or so years since I met her, it was odd that we had yet to have the opportunity to create something together.  We got together for two days and holed up for hours just coming up with beats and textures and just worked over the song and put something weird together that felt like a mix of a forward moving pace with serious sounds and something lighthearted and inspirational as well.  With these longer songs even more so than usual, it is important to me to have more in-room, on-hand hands on control over the production as well so as to allow for the peaks and valleys in the fluxing emotions and lyrics and deliveries and "movements" in the song.  A fun fact, in the sparse third verse (what I think of as a sort of part b of the song) the instrument you hear is a Kalimba she got from Africa with reverb on it.

What is that sample at the beginning and end?
One of my favorite shows of all time is The Twilight Zone.  The wonderful episode "Kick The Can" is very much about my theories/values that this song describes.  It is a short episode about the seemingly magical power of the unabashed joy and liveliness of youth and the quotes were just too perfect to pass up!  I highly recommend watching that episode (and really all of them!).  Luckily now you can watch several seasons of it on Netflix!  Also, the classics are always played on the New Years Day marathon!

I really hope that you've enjoyed this blog series, that it offered insight into the songs and my creative process as well as some external bonus thoughts and ideas as well!  It was a laborious joy to write it and to share this series and especially this album with you all!  It's incredible to me to have people sincerely interested in supporting my work and I feel immensely lucky, so thank all of you! There is much more to come this year musically and otherwise.  Click below to listen to "Youthtopia", feel free to follow the bandcamp links to pick up the physical edition of the album on cassette or other merch goodies on my page!
Remember, it isn't great to be childish, but it is beautiful to be child-like!
FORGET NOT THE YOU in YOUTH and the YOUTH in YOU.
With love,
-Bruce "AllOne" Pandolfo

Posted by AllOne at 8:05 PM No comments: