2021 has arrived!  Somehow, we survived 2020.  I suspect in large part via escapism, at least for me, was responsible for being delivered sanely through this year of chaos.

2020 was another year where I only posted twice on a blog I keep telling myself I'll make regular weekly posts on. 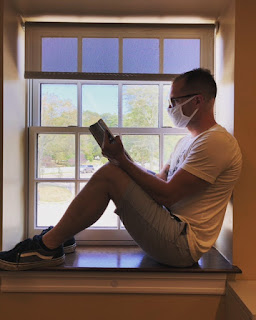 Where'd ya get em?

About half a dozen books I read were ones that were assigned for classes ("Art Work", "Highbrow Lowbrow" "The Essentials Of Journalism" "The Home Place", "To Love The Wind and The Rain" to name a few).  I've decided to actually read through the entire books that are assigned in my classes, to seriously ensconce myself in the information and mentality of the Journalism degree I'm working towards at Stony Brook University.

A few books (Hate Inc. and The Missing Year Of Juan Salvatierra and "The Three Paradoxes") were sent to me as surprised by my pen pal.  His music, book and movie recommendations are almost always on point.  Both of these suggestions were incredible, thanks Cam.

Now Hear This: Listen and Learn

The quarantine and pandemic scenario allowed for a lot more reading at home.  I also was furloughed from my job of 10 years and ended up doing gig work driving for Grub Hub.  Suddenly driving 30-40 hours a week, I was granted the chance to listen to a lot more audiobooks.

28 of the books I "read" were read to me. I use audible, and have a subscription (a bit pricey, admittedly and this coming year I'm going to try to use the virtual library network "Libby" and "Overdrive" for my audiobooks, as it is free with a library membership.  The audiobooks I've been choosing are still dictated by books on my Yet-To-Read shelf and I've been taking the audio as an opportunity to get through more of what I intend to take in.

One place I kept finding myself impulsively buying books through is ABE BOOKS for cheaper used books that are aggregated from thrift stores, small book stores and libraries. Some other more independently mindful or less mega-rich alternatives to Amazon are "Thriftbooks" or Indiebound.org

A lot of the comics, if I got them in person, were from my local comic shop in Smithtown, Fourth World Comics.  They're a family owned business that have such an immense variety of comics, toys, graphic novels, books and art and yet with all of this, they're remarkably organized.  They've been the crux of my comic reading journey the last few years.

Typically, when I'm traveling or just wandering around the towns of Long Island, if I stop into a book store, thrift store, antique shop or tag sale, chances are I'm going to buy a book if it is cheap and seems like something I would read eventually, even years down the line, I end up buying it.  I enjoy the thrill of the treasure hunt, it's gratifying to pick up a new book and I have the opportunity to support a little  business in some small way.  If I'm traveling, the book becomes a landmark or memory and an instructive souvenir of sorts that does more for me than a keychain or some other inevitably dust-collecting curio.

As always, all of the books below will be embedded with info or purchasing links ( I tried to use independent booksellers or directly from publishers and avoid amazon etc where possible).

For 2021, I've decided on an experimental "resolution" of sorts.  In an attempt to whittle down some of my ever-stocked Yet To Read shelf I'm opting not to buy myself any books (unless I need them for my college classes).  This will hopefully both impose some discipline, save some money and contribute to every reader's laughable promise to mitigate the towering stacks of literature they hoard in promise to read.

Happy reading, Please comment with suggestions and let me know if you've read any of these and your thoughts on them!

The Missing Year of Juan Salvatierra by Pedro Mairal

The Picture of Dorian Gray by Oscar Wilde

A Tale of Two Cities by Charles Dickens

The Outsider by Stephen King

If On A Winter’s Night A Traveler by Italo Calvino

State of Fear by Michael Crichton

Around The World In 80 Days by Jules Verne

Nothing To See Here by Kevin Wilson

Journey To The Center Of The Earth by Jules Verne

Tales From The Loop by Simon Stalenhag

Round The Moon by Jules Verne

Crime and Punishment by Fyodor Dostoyevsky

The Turn Of The Screw by Henry James

The Elements of Journalism by Bill Kovach and Tom Rosensteil

Pull Me Up by Dan Barry

A Fearless Heart by Thupten Jinpa

The Great Divergence by Timothy Noah

Into Thin Air by Jon Krakauer

Ghost Rider: Travels on The Healing Road by Neil Peart

Traveling Music: The Soundtrack To My Life and Times by Neil Peart

The Moral Landscape by Sam Harris

H is For Hawk by Helen MacDonald

Travels With Charley by John Steinbeck

Brighter Than You Think by Alan Moore

If It Bleeds by Stephen King

The Adventure Zone by The McElroy Brothers

Snakes and Ladders by Alan Moore

Fables Vol. 21: Happily Ever After by Bill Willingham

The Three Paradoxes by Paul Hornschemeier

Posted by AllOne at 8:39 AM No comments: