Thanks for joining me, AllOne family!!!
While I've been working "behind the scenes" on my new album "Rapologues" and my short story collection "Water Coolers & Camp Fires" and other such personal creative endeavors, I've taken it upon myself to do a few external projects with talented friends.  One place that I've met a lot of ambitious and personable audio/visual artists, business folk, creative types is a new gathering called "The Rendezvous" that was started by my brilliant friend and collaborator Pete DeMaio.  It's sort of a "networking group", but more on that later, as it grows and is able to invite and accept more and more people to share ideas/resources and help one another achieve their goals.  One opportunity that came my way was the chance to listen to and do a write up the Dinosaurs in Vietnam's 3rd compilation "Long Island Excavation".... lets get into it!  The project is free to download and a great treasure so I'll start by saying that I recommend you go right now to listen to it and download it immediately, but I'll get into more of it below!  EVEN IF YOU DON'T READ THIS LENGTHY REVIEW, PLEASE JUST CLICK THE COVER ART BELOW AND LISTEN TO THIS PROJECT, I PROMISE YOU THAT YOU WILL FIND AT LEAST A FEW NEW FAVORITE BANDS!!!

What is Dinosaurs in Vietnam?
Dinosaurs in Vietnam is the brainchild of the talented and generous Long Island musician, engineer, friend and mastermind of many mad hats Will Forthman.  (Will actually played some role in at least half of the tracks, be it instrumental or production oriented!)  DiV has been in existence for nearly a decade, a DIY label based out of Lindenhurst run by passion and a belief in the flourishing creative scene. I asked him for an explanation of DiV (and the history and details behind this compilation) and he had this to say...

"Dinosaurs in Vietnam was started in 2007 ... Originally intended as a label, it morphed into the moniker I used to promote local shows. I booked a number of tours for Massapequa-based bands.... In 2009 I relaunched DiV as a local DIY label--- the original goal-- and released the first comp "Save Our Heads For The Future", which featured two songs from six bands. I released Volume 2, "Crude Oil" in 2010 featuring 15 bands. Both of these comps stayed true to Wrong Islands DIY aesthetic which I always appreciated... In 2012, my uncle finally completed his basement studio. Dubbed "Lindy Studios", DiV entered its third phase. Now we had a studio and I started a number of recording projects...During this time I started the beginning stages of volume 3 of the compilation series. I had a hand in about half of the 21 tracks on it; the other half were pre-existing tracks other artists contributed. With the help of Mike McManus, I finalized the track listing and Paul Motisi created the cover art, something that was kicking around in the caverns of my brain for years.... Together with Mike and Paul, volume 3 of the series "Long Island Excavation" was born. It is my most ambitious project to date and I am very proud of it. It encompasses all of the passion and belief I have in our local art community here on Long Island, and it is a photograph of a mere sample of the astounding talent we have here."

The Tracklist (click the band names to visit their site)
I've highlighted my absolute favorites,  that I can't get out of my head and/or returned to obsessively:
1. Tom Moran Band - "Pushing The Drug"
2. Joyce Nancy - "The Confessor"
3. The Grand Cannons - "Dead By Dawn"
4.The Boys Club - "When We're Up Again"
5. Killer Wails - "Four Four For Sure"
6. Rice Cultivation Society - "Cell Phone" 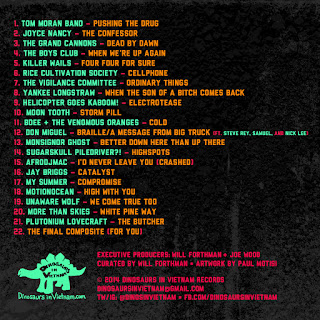 A diverse collection
This project is sort of an eclectic Long Island music scene starter kit.  Still, the fact that this lengthy compilation is just skimming the surface is a remarkable truth, speaking to the depth of activity and talent in the Long Island music community!  Will has valiantly arranged for us a delectable sonic smorgasbord featuring a myriad of styles (as any compilation could be expected to) but even more so since DiV isn't necessarily a label so much as a scene-support-hub-collective.  Despite the diversity present here, McManus and Forthman have tastefully arranged the tracks so that the transitions between song styles and genres are relatively natural and comfortable (save for the jarring switch from the catchy chanting Yankee Longstraw song into the Helicopter Goes Kaboom! track, but to be fair, H.G.K.'s music is unique and would stand out anywhere).   Many of these songs are so cleanly mixed and arranged that you'd think they come out of a retail-bought CD (Tom Moran Band, Joyce Nancy, Moon Tooth, Don Miguel, The Grand Cannons, The Vigilance Committee some examples) , while others are more lo-fi, raw and gritty (The Boys Club, Monsignor Ghost, Sugarskull Piledriver?!, Helicopter Goes Kaboom!, Plutonium Lovecraft to name a few) .   It's a healthy balance of these two types of presentations that maintain the DIY authenticity that Dinosaurs In Vietnam treasures, while also proving all of these reputable grassroots artists have considerable pride in their work.
A cool little background informational side-note speaking to the familial quality of creativity in this scene and on this project is that many of the performers on these songs are interchangeable from band to band.  Brian of BDEE + the Venemous Oranges, also produced the Monsignor Ghost track.  Brian and Mike McManus make up Helicopter Goes Kaboom! while Mike McManus a.k.a. Don Miguel also drums on the Tom Moran Band track.  Lauren Diehlman sings on that song as well as in Killer Wails and Unaware Wolf.  Phil Corso recorded the drums for The Vigilance Committee's song as well as the More Than Skies track.  Nick Lee is the madman virtuoso guitarist from Moon Tooth and is also featured on the Don Miguel track.  The designer of the DiV logo Paul Motisi is also responsible for the final track by Plutonium Lovecraft.  Those are just the creatively incestuous connections that I am aware of.  The point being, not only is this collection a testament to the great music that can be found in our area, but also the great congregation of people and creative types dedicated to the enjoyable and social process of creativity and music.

Please listen to this incredible compilation, rife with talent and imagination manifested in all sorts of audible goodness!  Be comforted in knowing each and every one of the people involved in this project are excellent human beings who make music and live life with unapologetic ambition and a seemingly ceaseless amount of skill!  So go ahead, stream it, download it and share it, I promise you will find a handful of bands that you love.  Another reminder, Will and the gang are re-releasing the project Wednesday July 8th and celebrating this momentous occasion with a show at the Huntington's Cinema Arts Centre, one of Will's favorite Theatre's on Long Island!  The show will feature artists that are included on the CD.  The physical copies will be $3 but the compilation will always be for free online at www.dinosaursinvietnam.com .

Posted by AllOne at 9:08 AM No comments: