Andrew Mesmer's "Believe Me, You Won't!"

Happy Holidays my friends, I hope they've all gone well!  Welcome to 2015! 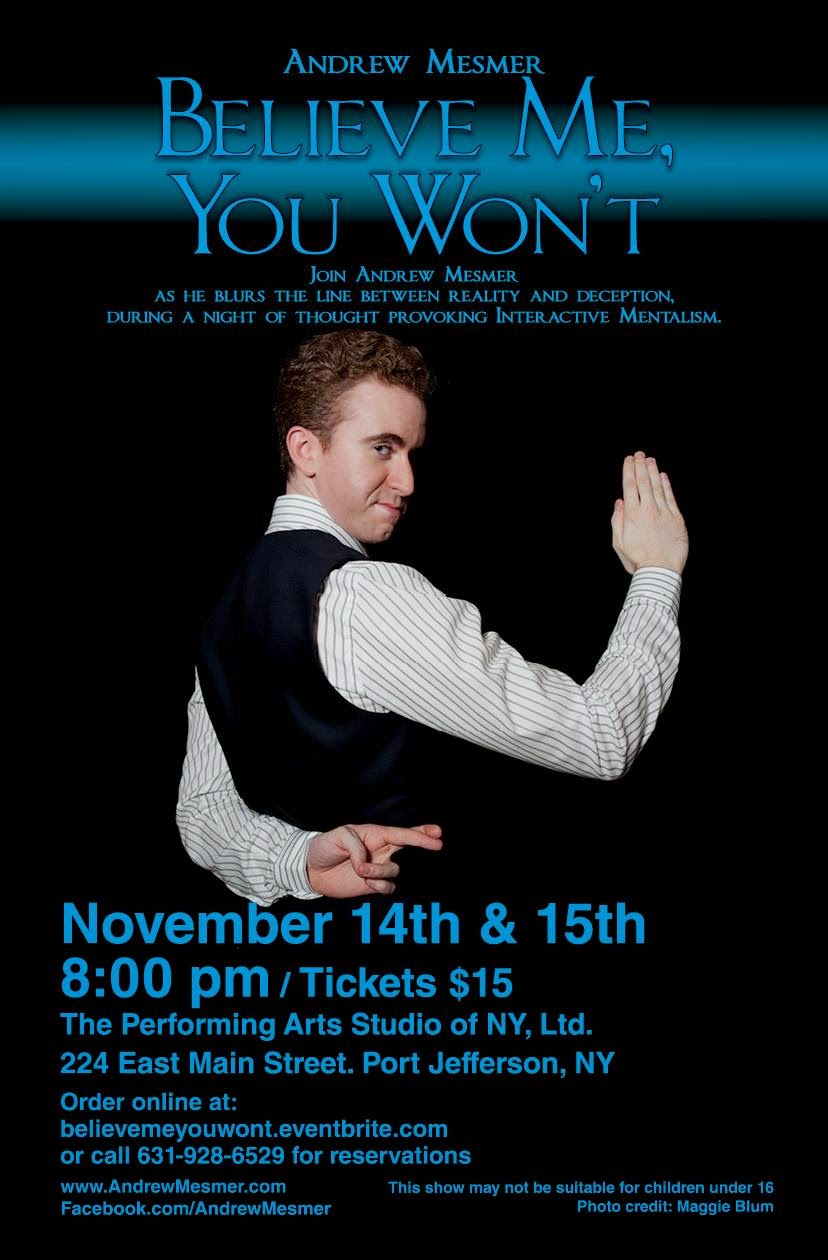 2014 was full of enriching endeavors for me and I'm going to take a bit of time to discuss one of the most important experiences of this past year...  It has been a little over a month since my good friend, mentalist Andrew Mesmer premiered his debut full length mentalism performance titled, "Believe Me, You Won't" at the Performance Arts Studio in Port Jefferson. I wanted to introduce you to him and reflect a little on the experience, as I had a behind the scenes hand in developing the show with him and it meant very much to me!  First I invite you to check out his website at www.andrewmesmer.com and like him on HIS FACEBOOK PAGE follow him on twitter @AndrewMesmer ..go ahead! If you want something memorable for your next gathering, Andrew does private events, corporate events and can adapt his capabilities and presentation to nearly any event type with top notch professionalism for reasonable prices!   Oh you're back? Okay good, we both thank you!  Onward and forward...

Meet Andrew Mesmer
Andrew has been a friend of mine for nearly 15 years and to be honest I have never known a more diligently motivated person.  Once he sets his mind on a goal or interest, he dives headlong into it and learns everything about it and does it well.  His discipline and dedication seems almost inhuman, and I joke to him about it often, but that just may come from the generally lazy or unambitious social climate we've grown up in and scarily grown to accept as normal.  His doggedly ambitious exception to this is inspiring, to put it mildly. 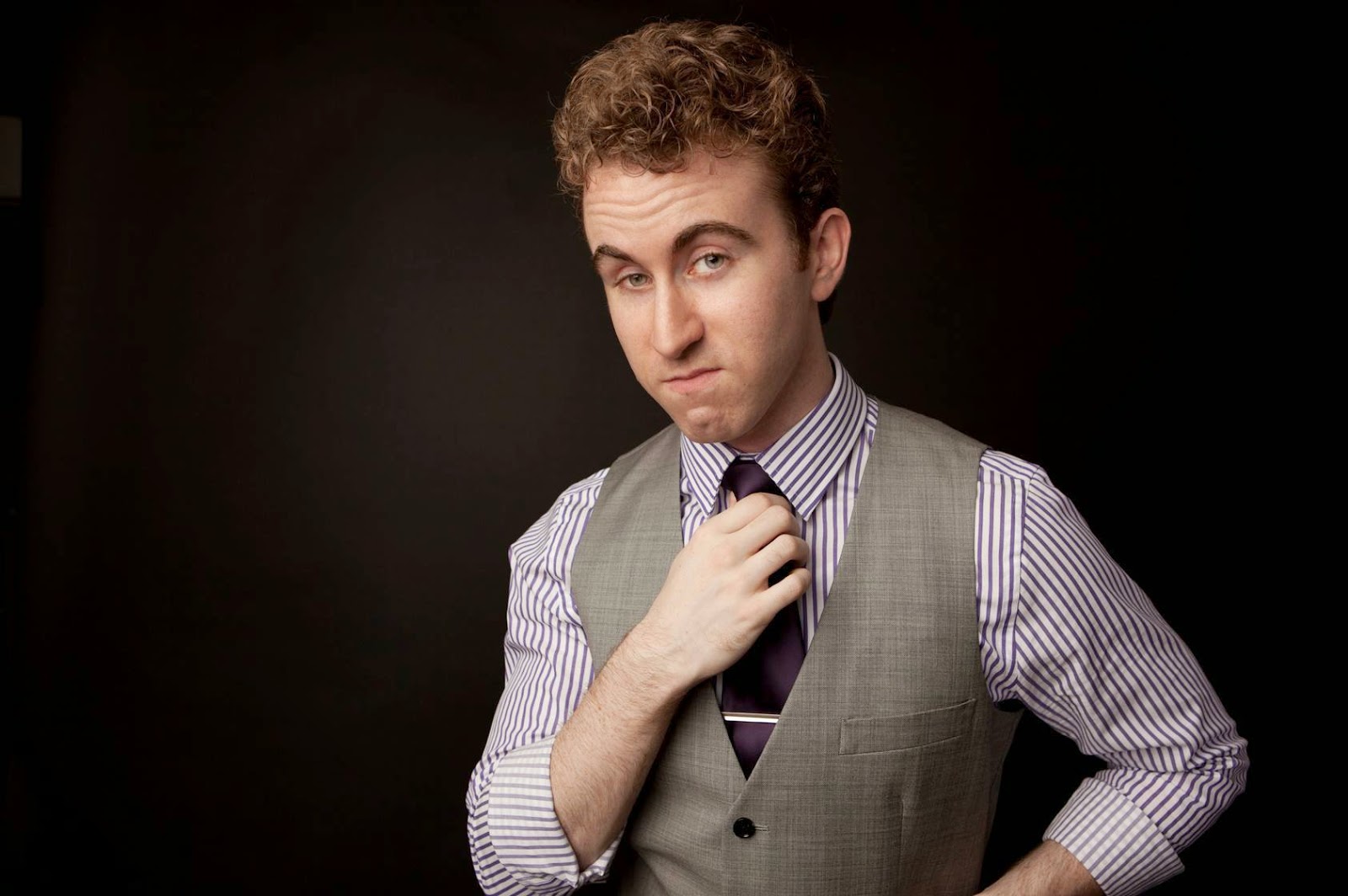 His stage presence is amiably authoritative, comfortable and impressive.  No matter the room or space he is performing in, his confidence and skill draws you into the world of the psychological theories he is sharing and the interactive awe-inspiring examples he employs.   During Andrew's charismatic performances you will be likely taught some new fascinating thing, while simultaneously having the rug pulled out from under you while he compromises the reliably predictable world that you always grew to accept as truth.  He went to Five Towns College for acting and stage production and also hosted an incredible weekly open mic for three years at Cool Beanz Coffee House that cultivated the talents of myself and many others as well a network of many friendships among the attendees that endure still to this day.  He also performed magic there and over the years with that aforementioned dogged studiousness I've seen his interests and talents range gradually from traditional magic to more complex, sophisticated and impressive feats that fall under the umbrella of mentalism.

What is Mentalism?
Mentalism is a form/style of performance and performer that combines a mosaic of talents/studies including illusions, psychology, theatrics and crowd interaction.  As Andrew says with efficient succinctness in his opening monologue of "Believe Me, You Won't"  "I manipulate the five senses to create the illusion of a sixth." ... when his job is done correctly (and it always is) he rides the seam between reality and illusion, and you're unable to tell which from which.  He doesn't claim to have any special powers, simply just admits that he studies interesting human phenomena and things like muscle reading, body language, lie detecting and employs these and other ideas to give a compelling show that would convince you he is actually in your head! 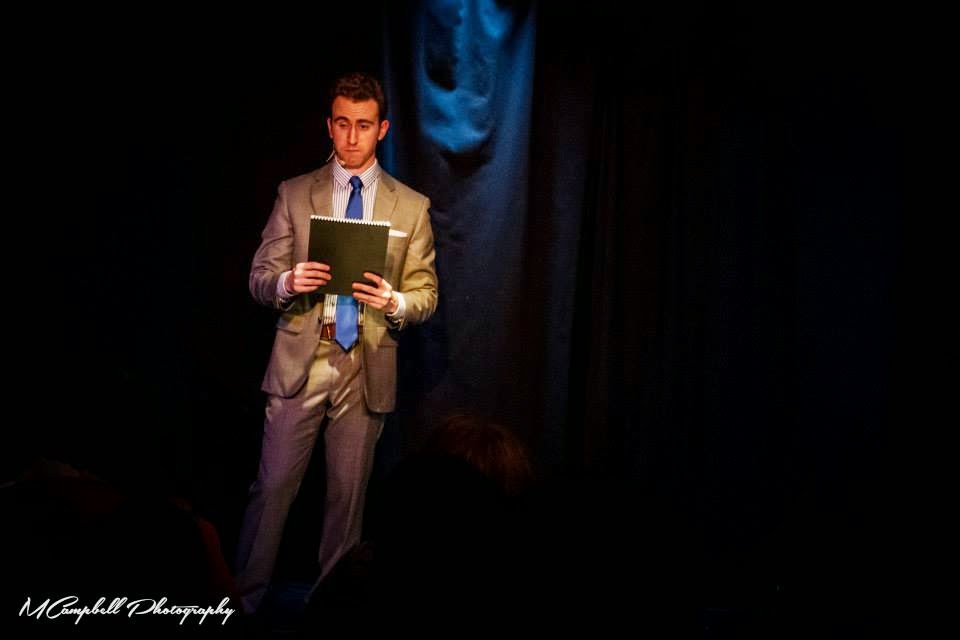 Believe Me, You Won't recap
A bit about the venue:
Believe Me, You Won't was a two night show on November 14th and 15th (Friday and Saturday) at the aforementioned Performing Arts Studio in Port Jefferson.  The venue was a sort of smaller black box theater that seated 70 people cozily.  It was an intimate and adequate space for the performance and the people who run it were very kind and accommodating with us.  The fees for rental are reasonable, if you're looking to attend shows or put on one, I recommend checking out their site that I linked above. NOTE: We had a bit of a hard time finding a spot for this event, so if anyone knows of any black-box theaters on Long Island or smaller theaters, please email me at AllOneVoice@gmail.com or Andrew at Andrew@andrewmesmer.com . 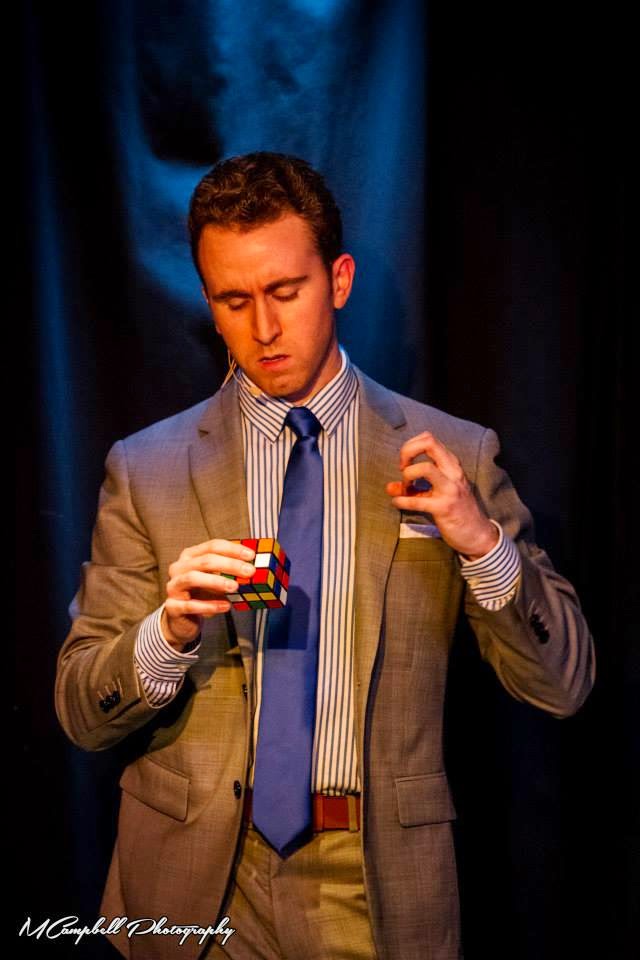 After weeks of preparing and advertising and word of mouth we were nervous about the turnout, but the pre-sale online tickets helped give us a decent gauge of who would show up, and luckily the response was very good.  We got a knowledgeable friend of mine Tim Bedell to help run the sound and lights and had two days of rehearsals leading up to the show to determine the most efficient use of the space and the technology available to us to accommodate the show's needs.  For online ticket purchases we used a website service and app called www.eventbrite.com which we found worked out really well, our audience members considered it really intuitive and the majority of our attendees got their tickets beforehand.  We nearly packed the place out both nights between pre-sale tickets and walks-ins, both nights the audience was wall to wall.  The Saturday night showing was the big night and we nearly had to turn people away at the door! 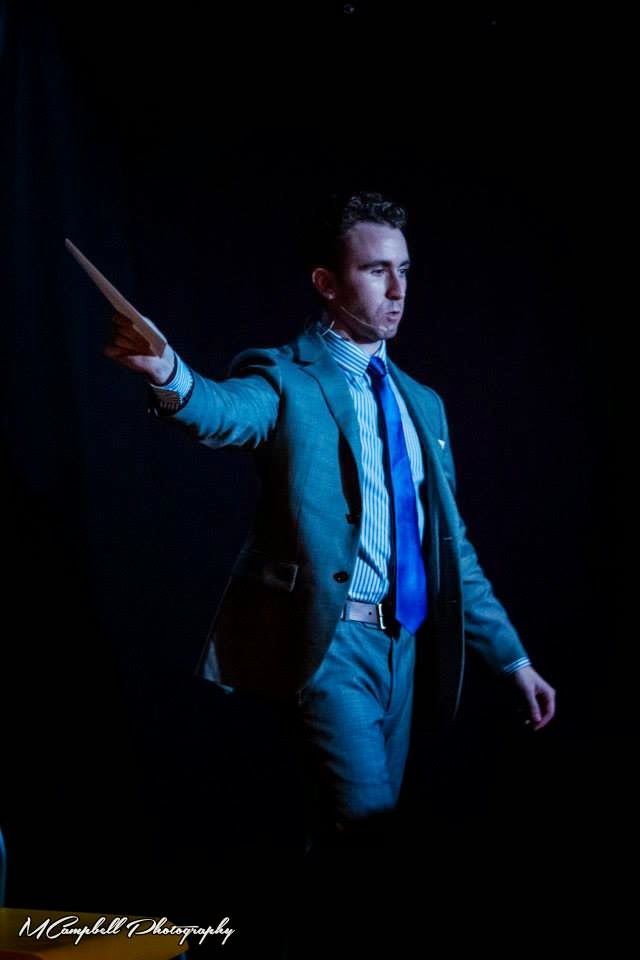 Without giving too much away...the show ran for about an hour and a half and was comprised of non-stop crowd participation, interesting theories and routines and between the men and women, young and old, magicians and laypeople, everyone's reactions were eyes wide and jaws dropped in astonishment.  A compact audience and personable stage was a perfect combination for an effectively intimate and engaged show.  Participants were taken from around the room as their hidden ideas were uncovered, muscles/pulses/gestures/expressions were read, lies were exposed, concealed drawings were duplicated, and a slew of other seemingly impossible feats were performed that lead up to a baffling finale closed both nights that consisted of half a dozen miraculous connected circumstances that combined all of the prior routines and concepts in the show and involved a considerable group on stage.  I'd say at least half of the audience throughout the show was interacted with directly and utilized in routines, so that most people's experience was much more than a passive viewing of a live act on a stage and many people walked away with personal memories of phenomenal unexplained things that happened to them or friends in the group they came with.  I worked the door greeting and taking tickets from attendees and had a great opportunity to see the difference in people before and after the show, people left wide eyed whispering excitedly to one another entirely puzzled and entertained, immersed in the world of questions and concepts that Andrew presented to them, incredible feats of psychological trickery and manipulation that left people scratching their heads with the hands that were undoubtedly worn out by enthusiastic applauding. 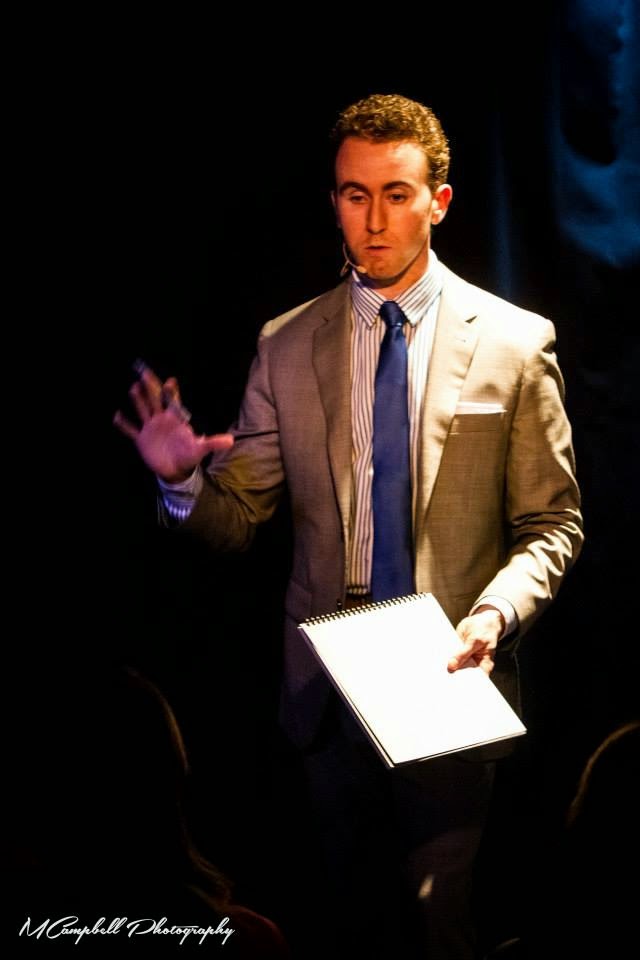 All in all, both nights went even better than we anticipated especially for the debut showing!  If you were there, please share this review with others or tell us about your perspective of the event!  If you were unable to attend the show, fear not!  Andrew was gratefully requested to return by the venue anytime and he plans on revitalizing this show there at the Performing Arts Studio as well as making it a goal to bring the show to new venues throughout the island and the city as well!  Again, if you have any ideas or connections with people or facilities where he can do so please email him at Andrew@andrewmesmer.com!!
Because of my friendship and admiration of Andrew, as well as my genuine involvement in the project, I sincerely treated the success and integrity of "Believe Me, You Won't" as though it were a project of my own.  It brought me great joy to see it come to fruition.  This show was one of my most proud moments of 2014, to share in the success of one of my best friends from the sidelines and witness the immensity of his talent, intellect, and hard work culminate finally into such a marvelous piece of work as he dazzled and puzzled an enraptured audience.
Nothing is as it seems, except for the purest of friendships!
Reality is what you make it... happy 2015, make it yours!
-Bruce "AllOne" Pandolfo 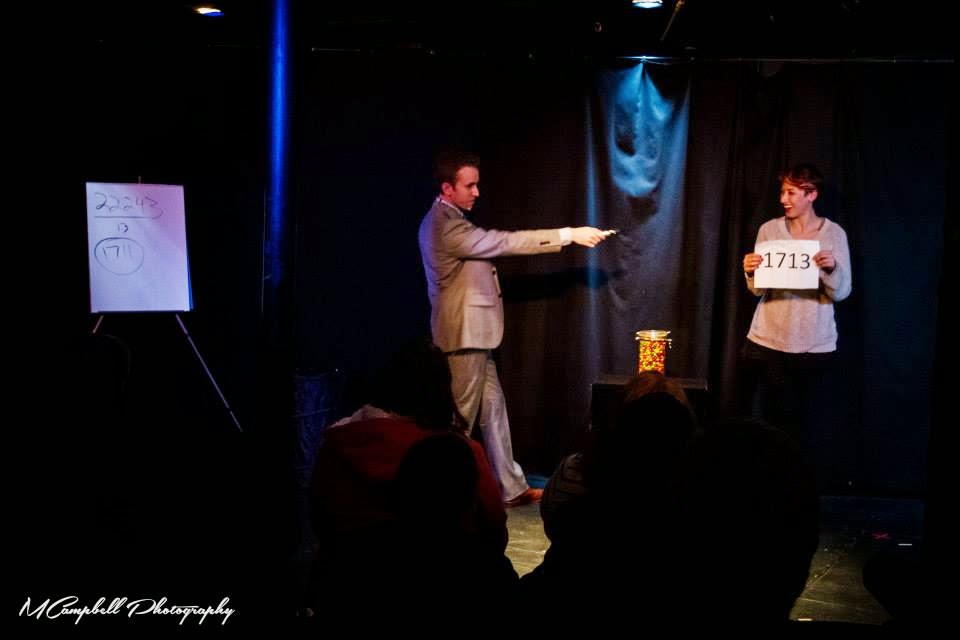